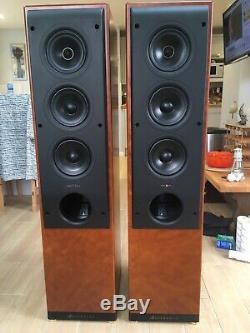 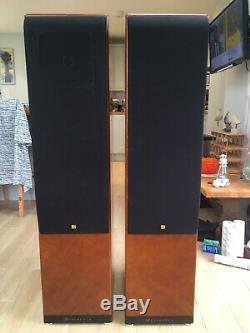 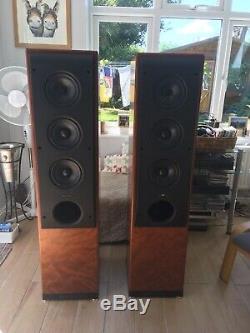 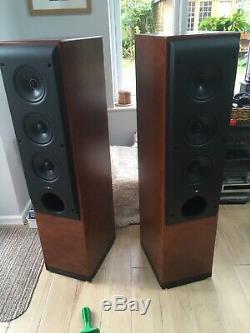 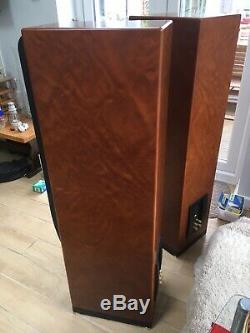 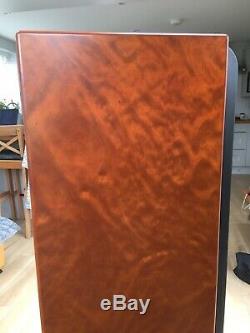 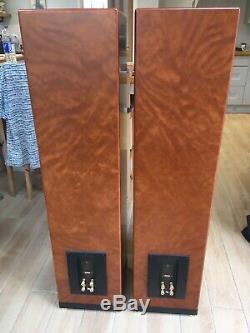 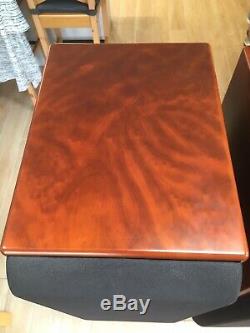 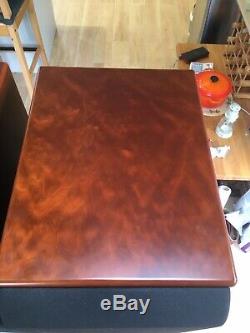 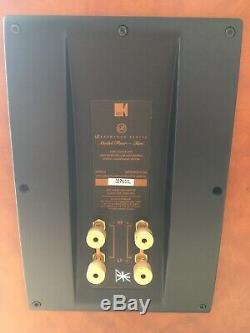 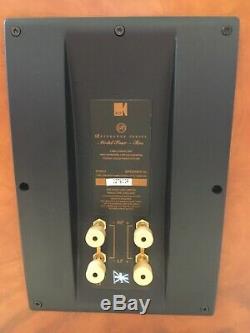 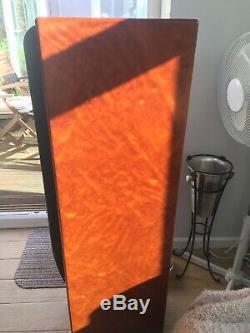 KEF Reference Series 4 - 2 Audiophile Floorstanding Speakers in Immaculate condition. These huge but beautiful KEFs are 20 years old, but have been cared for and loved by one owner from new.

They are 99.9 % immaculate and as they were the day they were made. The real Rosetta Burr veneer is a sight to behold - stunning!

The sound is phenominal - huge and airy. This is a serious pair of high end speakers. I've been running them with an Audiolab 800A integrated amp and they sound awesome, but they can do so much more with a high end amp set up such as Krell, Chord amps and the like. If you live in a small flat, read no further. Specifications: Four-way, six-driver loudspeaker system with coupled-cavity bass loading.

The Model Four is the largest model in KEF's current Reference series of loudspeakers, discounting the R107/2 Raymond Cooke Special-Edition (reviewed in a follow-up in October'95). It's also the largest KEF model that uses their Uni-Q® loudspeaker configuration. When I visited the KEF factory last October with a group of audio journalists from the US, KEF emphasized the importance of Uni-Q technology to their future plans. They consider it proprietary, and intend to enforce the worldwide patents they hold on the design.

One look at KEF's current line will be enough to tell you why they're so serious. Uni-Q drivers may be found not only in most of the Reference series, but in most of their other models as well. The most significant exceptions: the Raymond Cooke series, a few inexpensive models, and their THX-certified loudspeaker system. The Uni-Q driver was originally developed by KEF for use in the Eureka Archimedes project, an ambitious research effort conducted by KEF and a number of other companies to investigate the interaction of loudspeakers and rooms. Uni-Q, for those unfamiliar with the design, positions the tweeter at the apex of the midrange cone, in the position normally occupied by a dust-cap.

The advantages: a coherent radiator, free from the acoustic interactions present in all loudspeakers with physically offset drive-units. The disadvantages: the tweeter is now loaded, effectively, by a horn (the midrange cone). So we are trading one form of interference, perhaps, for another; hopefully we will gain more in the tradeoff than we lose.

Earlier versions of Uni-Q had shown that there are advantages to the design, though not without some sacrifice in top-end smoothness. But the Uni-Q technology is now in its fourth generation. My listening tests confirmed that it is definitely a different-sounding beast than earlier versions of the design. There's more to the Reference Four, however, than a...

At the other end of the spectrum, KEF uses what is commonly called a bandpass enclosure for bass loading. In this type of design, the woofer is (or woofers are) mounted inside the cabinet.

One side of the woofer is loaded into an internal chamber, which may be either sealed or ported. The other side loads into a second chamber, which is in turn vented to the outside. Properly designed, this type of system can provide extended bass, while the port to the outside acoustically rolls-off the top-end response of the internal driver(s)simplifying the work of the system's crossover network. In the Model Four, there are two 10 internal bass drivers.

They each fire into their own individual, internal chambers. The other side of each driver loads into a third internal, common chamber. The latterwhich is also connected via ports to the other two internal chambersvents ultimately to the outside.

The bottom line here is that the total output of the two internal woofersbelow their 160Hz crossovercomes from the external port. If all this sounds rather complex, it is. Any reflex design is inherently more difficult to design for optimal operation than a sealed cabinet; KEF's bandpass design, which they refer to as a "Coupled-Cavity, " is even more so. And there's an added wrinkle.

The internal drivers are connected back-to-back by a rigid rod to help cancel physical vibration. Vibration is further reduced by decoupling the front-mounted drivers from the cabinet by rubber bushings. The cabinet itself is well-damped; the knuckle-rap test indicates a damped cabinet of average thickness rather than the cast-from-concrete sensation typical of a cabinet with ultra-thick walls. Both approaches are valid design routes to solving the problem of cabinet vibration, each having strong advocates. Clearly, the Wilson WITT, which I reviewed in January Vol.

177, comes down on the other side of the fence. The Model Four is much easier to move around the room than the WITT, though at over 100 lbs, the KEF itself is hardly svelte. Oxygen-free copper wiring is used for all internal connections in the Model Four, with different gauges for bass, midrange, and treble drivers.

Knurled, gold-plated bi-wire terminals are provided. I don't like KEF's terminals. They're big, heavy-duty, and attractiveand will not accept most spade lugs unless you put one of the tines through the hole in the terminal and thereby mash it when (if you can) you tighten it down, But this is, I admit, a more irritating problem for a reviewer than for an owner, who's not likely to switch leads all that often. They do accept standard banana plugs single or bi-wired.

The cabinet's base is made from a rigid, mineral-filled polymer (as is the front baffle), and can be filled with sand or lead shot if desired (I did not do so). Reversible, adjustable spikes are fitted; when the spikes are used, the gold-plated cabinet feet act as lock nuts for them. Recognizing the way the market is moving, KEF has provided magnetic shielding for all of the drivers in the Model Four, for use with video monitors if desired.

Finally, all of KEF's Reference Series are matched to within 0.5dB of the standard for that model. And as I observed when I toured KEF's plant, each pair of Reference loudspeakers is hand-assembled to completion (starting with the finished drivers, finished cabinets, and assembled crossovers) by a single craftsman.

Any problems - please contact me before leaving feedback, and we will sort it out. Many thanks for looking, and enjoy... The item "KEF Reference Model 4 2 Audiophile Floorstanding Speakers Superb Rosetta Burr" is in sale since Friday, August 21, 2020.

This item is in the category "Sound & Vision\Home Audio & HiFi Separates\Speakers & Subwoofers". The seller is "bongobonkaz" and is located in BROCKENHURST. This item can't be shipped, the buyer must pick up the item.