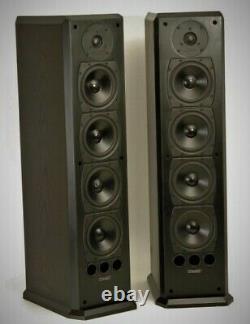 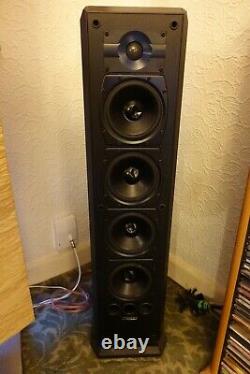 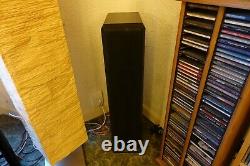 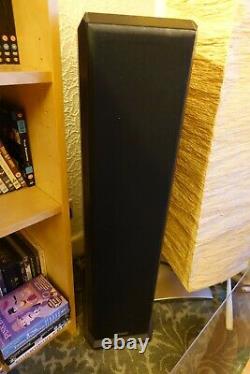 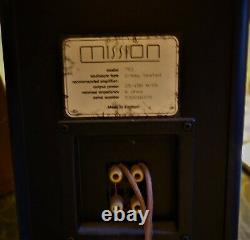 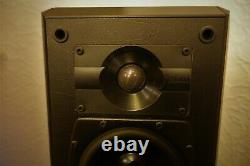 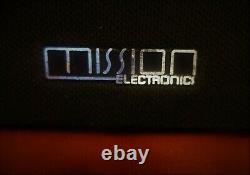 MISSION 753 AWARD WINNING FLOOR STANDING HIFI SPEAKERS. THESE AWARD WINNING SPEAKERS ARE IN FANTASTIC CONDITION. THEY ARE MEMBERS OF THE TOP 30 SPEAKERS CLUB AS CHOSEN BY WHAT HIFI FOR THEIR LIFETIME BEST SPEAKERS. THE "LIFETIME" TOP 30 IS BASED ON THE BEST THEY HAVE EVER TESTED SINCE THE MAGAZINE STARTED TESTING. THEY ARE FINISHED TO A VERY HIGH STANDARD IN A BLACK ASH VENEER WITH SPIKED FEET TO MINIMISE DISTORTION AND VIBRATION AND ARE IN FANTASTIC CONDITION. THE MESH FRONT COVER IS DETACHABLE. THEY FORMED PART OF A SURROUND SYSTEM I HAD IN MY TV ROOM AND ARE GREAT IN ANY APPLICATION AND SETTING. EACH SPEAKER WEIGHS 25 KG. Type: 2 way, 5 driver loudspeaker system. Frequency Response: 45Hz to 20kHz. Recommended Amplifier: 35 to 150W. Bass: 4 x 130mm paper. Tweeter: 1 x 26mm ferrofluid cooled. Enclosure: 34 litre, sealed with bass assist. Dimensions: 875 x 208 x 315mm. Much of this achievement has to do with Mission's high-efficiency, very'green' factory in Huntingdon, with its computerized "High-Bay" storage systems and fully automated production routines. In the loudspeaker cabinet-making area CNC cutting and forming machines make supremely accurate light-work of the 753's complex transverse-folded enclosure, leaving a small manual team comparatively little to do in terms of final assembly (glueing and folding is about all that is required) before the drive units are installed and the final automated testing routines applied. The 753 is a floor-standing unit which, despite its array of five drive units, is basically a three-way design though it claims only to be two-way, as I will explain. Four identical 130mm (5-1/4 in) cone low frequency units are used, two for the extreme LF and two for the bass/midrange, plus a single 25mm (1 in) dome tweeter. The 875mm high cabinet is made of medium density fibreboard (MDF) throughout and is internally braced by MDF partitions, with the bass/midrange drivers and tweeter given their own sealed enclosure at the top whilst the LF drivers work in a reflex-loaded compartment at the bottom. This paralleling of drive units is a most effective way of doubling the cone area to provide a greater output capability. Simply making a driver with a larger cone is liable to incur penalties in terms of cone rigidity (leading to cone breakup which produces an obvious distortion) unless the material is reinforced, and if it is suitably rein-forced its behavior will change anyway. Twinned units mounted vertically as here also permit the use of a narrow cabinet, with corresponding benefits in terms of lateral dispersion and, not least, visual acceptability. This LF unit has a "plastiflexed" paper cone (a low-mass PYA-coated cellulose) with a convex rubber-roll surround. This is driven by a long-throw 25mm voice-coil wound on a double-layer aluminium former from a high-flux ceramic magnet.

The pressed steel chassis is front-mounted through the baffle and held in place by an aluminium fixing ring and no less than eight Allen-headed screws which locate in captive threaded bushes at the rear. The drive and baffle are thus sandwiched by the fixings. This is far and away the most reliable method, emphasizing a'quality' approach which is evident throughout the design.

The tweeter uses a dome made up of five plastics layers, the top one of which is strengthened with an aluminium coating- Mission's best approach to that impossible-to-achieve ideal of zero mass and infinite rigidity. The voice-coil is cooled and damped by the standard addition of ferro-fluid in the magnetic gap. The tweeter is mounted on a fractionally concave face-plate and its dome is offered some protection by a fine mesh grille.

Mission rather modestly call this a two-way model, presumably because of the twin pairs of input terminals which are intended to facilitate bi-wire or bi-amplification, though in effect it is a three-way design. The four gold-plated terminals are located in a recessed plastics panel at the bottom rear of the cabinet and as supplied are paired with gold-plated rods to permit normal twin-core loudspeaker cable to be used. When separated, one pair accesses the tweeter section of the crossover and the other the LF plus bass/midrange in the normal way. However, in their sealed enclosure the bass/midrange drivers are over-damped (yielding a tight, crisp response) with a natural acoustic roll-off which would ordinarily leave the design sounding literally'high' and dry. This is where the LF pair come into play here, reflex-loaded via three 30mm diameter, 140mm-Iong plastics tubular ports so as to move enough air and maintain the output from 200Hz or so downwards. The internal walls of the enclosure are lined with bitumen damping pads and the void partially filled with polyurethane foam and polyester wool wadding to control standing waves. A ten-element crossover is employed, using 16 components-four inductors; five capacitors and seven resistors in various parallel/series combinations - all assembled on a high-quality printed circuit board. The high frequency crossover point is set at 2.3kHz.

With its integral shallow plinth this is a most elegant-looking, well-proportioned loudspeaker, finished to a very high standard indeed. It is available in rosewood or black ash finishes, real wood veneers which are made of reconstituted wood which is then smoked and dyed to the colour required; to choose to stain a real wood which is in plentiful supply rather than go to the expense and extravagance of obtaining rosewood itself is symptomatic of Mission's environment-aware approach. The folded construction is unconventional, the battle, top, back and bottom panel all being wrapped from the one piece, with the two sides then glued in place. This gives exceptional front-to-back rigidity.

The battle and rear are vinyl coated but the top, sides and plinth are fully veneered, and as the loudspeaker is optimized for placement close to the rear wall and as the battle is covered anyway by a full-height, full-width grille this sensible economy is to all intents and purposes hidden. The cabinet edges and those of the plinth are all bevelled (and in the rosewood finish painted to colour-match the veneer-they merge beautifully). On the fascia itself this helps reduce diffraction effects but is also imparts a visual interest which sets the design apart.

The plinth has threaded bushes which accept the carpet-piercing spikes provided. These do enhance stability and are claimed to improve performance. Being fully adjustable, they also permit some tilting of the cabinet for fine tuning of the axis, though it must be said that the dispersion is well enough behaved to need little in the way of such tinkering.

The 753 is intended to be placed within 12in of the rear wall, its bass alignment having been optimized accordingly. By specifying the position in this way, by tailoring the response to take account of the boundary effect, Mission are better able to predict the performance. The room still has a dominant effect on the end result but perhaps less than with loudspeakers placed some way out from the walls (the arrangement commonly preferred by most designers). A nominal 8 Ohms impedance is claimed, though the measured curve suggests 6 Ohms as more realistic, but in any event this is not a particularly awkward load and should present no difficult y to any ha lf-respecting amplifier rated at between 25 and 150 Watts (per channel into 8 Ohms), which is what the literature suggests as compatible.

Sensitivity is good at 90dB/Watt/metre. This is a most musical loudspeaker and in the several weeks I have been using it has given me much pleasure and precious little ca use for disappointment (a committed electrostatic user, I almost always have to go through a period of adjustment when making the change to any box loudspeaker). I was straight away impressed by the 753's crisp character, its ability to convey the start and stop of highly rhythmic, highly energetic music and also by its portrayal of ambient information-a subtle, yet crucial, component of the sound-stage.

The tonal balance is very smooth and even, with a quite seamless transition in the region of the main 2.3kHz crossover and remarkable bass extension and weight for so modestly sized an enclosure; this combination of a tightly controlled IB (infinite baffle) upper bass and reflex-loaded bottom has been well realized here. The treble is a good match for this, with only the faintest feathery edge to the extreme top raising any kind of doubt, an effect which all but disappeared when I substituted a bi-wired cable pair for the regular two-core connection. There is no magic here: running feed s back separately from a split crossover to the'solid', highly damped output of a good amplifier will exert demonstrably i. Measurably greater control over the drive units than when they are commoned at the end of a single cable of however small an impedance. The effect is subtle and it varies according to the equipment in question, but it can be analogous to removing one more veil in front of a visual image and the 753 is certainly good enough a loudspeaker in the first place to profit by such subtle enhancement.

I have greatly enjoyed using the 753. It is quite repertoire-independent-as happy with large- scale orchestral and choral works as it is with chamber music, its clarity maintained convincingly across a wide dynamic range. This is one of the most transparent organ sounds I have heard in a long while, with every strand crystal clear and a tremendous'feel' for the acoustic. The 753 conveys all this quite beautifully from the bubbling little A major Prelude of BWV536 to the imposing gravity of the great C minor Passacaglia of BWV582 - encouraging me not only to be blatantly partisan like this but, more importantly, to keep on listening! The item "MISSION 753 AWARD WINNING FLOOR STANDING HIFI SPEAKERS IN BLACK ASH & SPIKE FEET" is in sale since Wednesday, December 1, 2021.

This item is in the category "Sound & Vision\Home Audio & HiFi Separates\Speakers & Subwoofers". The seller is "2bluediamond" and is located in Rotherham. This item can't be shipped, the buyer must pick up the item.